Home My Life Working with The Sheffield Eagles
My Life

Working with The Sheffield Eagles

I have always been a fan of sports and as a kids I played Rugby Union a lot.  I never really enjoyed Rugby League when I was younger but since moving to Yorkshire I have got more and more into it.  Watching the game at club level is simply brilliant.  I am now at the point where if I am watching international Rugby, it is Union all day long.  At club level it has to be Rugby League, and in particular,  The Sheffield Eagles.

My interest in the sport really picked up during my time at The chamber.  I was fortunate to get to know Mark Aston and Andrew Henderson.  Mark is the Head Coach and CEO of The Eagles and Andrew is a former Eagles player and now Head Coach of the London Broncos.  Both are former internationals and Mark now also coaches the Irish Rugby League side who have qualified for the Rugby League world cup later in 2017 which will be held in Australia.

The Sheffield Eagles have gone through some difficult times of late.  A few years ago they were back to back Championship Champions but it has only been recently that this would have got the club to the promised land of Super League.  Unfortunately at  the time this promotion was not there so they couldn’t progress.  Over the last 3 years the club have been made homeless with the demolition of Don Valley Stadium and after a few years of financial struggles the club came close to going out of existence.  This is a former Challenge Cup winning club who defeated Wigan in 1998 in one of the biggest upsets and underdog stories in the history for the competition.  It is only the heart of Mark and a group of people who have kept the club alive and avoided going the way that the Bradford Bulls have recently.

Today the club is playing in Wakefield temporarily and a stadium is going  up on the site of Don Valley Stadium and the club is coming home, to a home after a few nomadic seasons…. 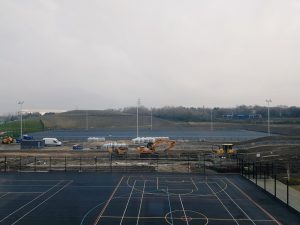 You can see the pitch and floodlights of teh new ground in this picture and the stand will hopefully be going up very soon.  Lets be honest,  Its not going to be anything like the size of Bramall Lane or The NEw York Stadium,  but it will be perfect for The Eagles and be a centre for Rugby in the region.

I wanted to do my bit for the club where I could.  I have volunteered to do what I can to bring sponsorship and commercial partnerships to the club and try and build these revenue streams.  I do this totally voluntarily as I don’t want to see the club disappear.

Playing in Wakefield is not ideal but this temporary solution is allowing the club to survive.  Have a look at the Eagles Website and come to a game.  You will not regret it.  It is all action and hard hitting.

Thanks for reading and #JointheJourney

My Mother in Law….