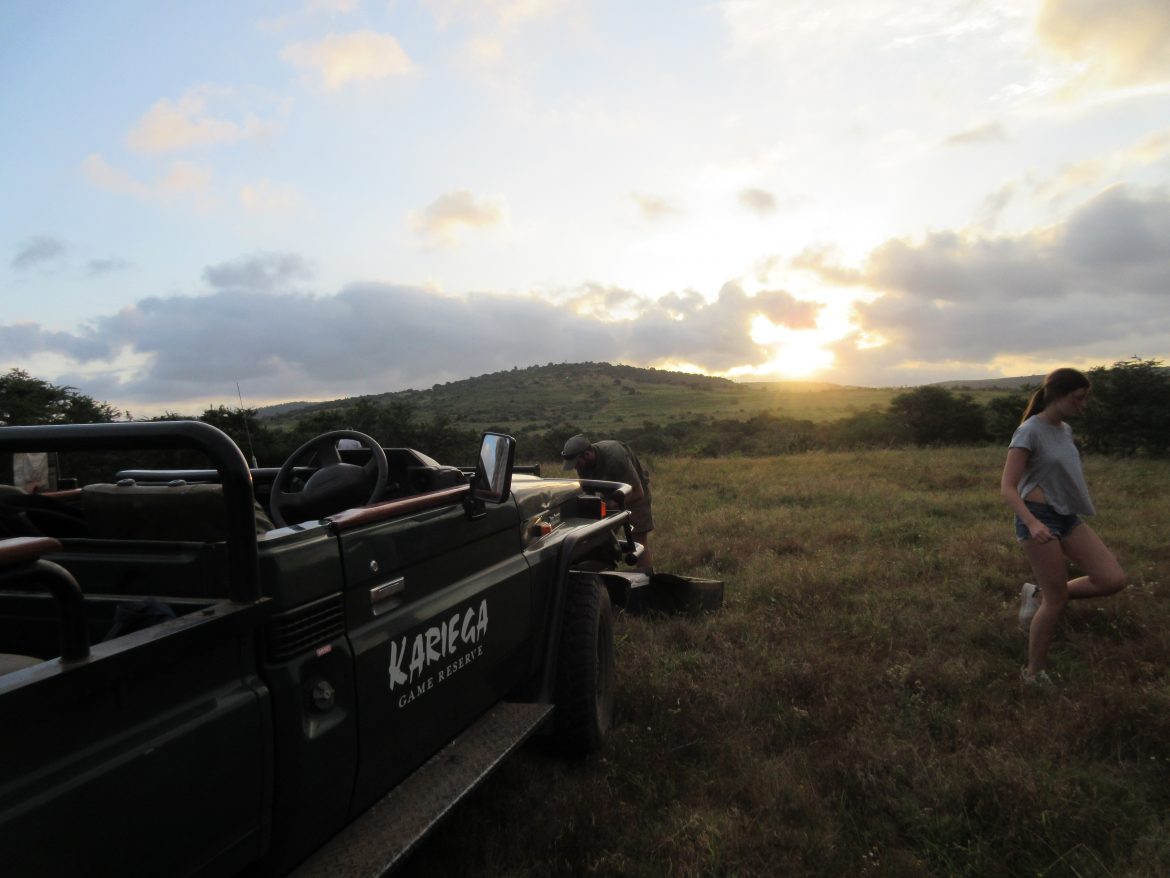 Where do I start with our trip to Kariega..

I have experienced this before but have done it at the age of 37,  I now appreciate how much I didn’t appreciate when I did it as a child.

As part of our African adventure,  on the 27th December we set of for Kariega.  As mentioned,  having been on safari in Africa before my biggest excitement in going was the look the Sam and Lucy would have when we arrived.  I honestly don’t believe they knew what they would experience!

Kariega Game reserve is situation approximately 25 km north of Kenton-on-Sea.  The reserve was established over 20 years ago and over 10000 hectares which include an array of habitats.  Situated in the Malaria Free Eastern Cape, The Kariega River runs down the  east side of the reserve and the Bushmans river to the West, and it plays host to numerous Game and Bird species along with some stunning views which you experience at Dawn and Dusk! 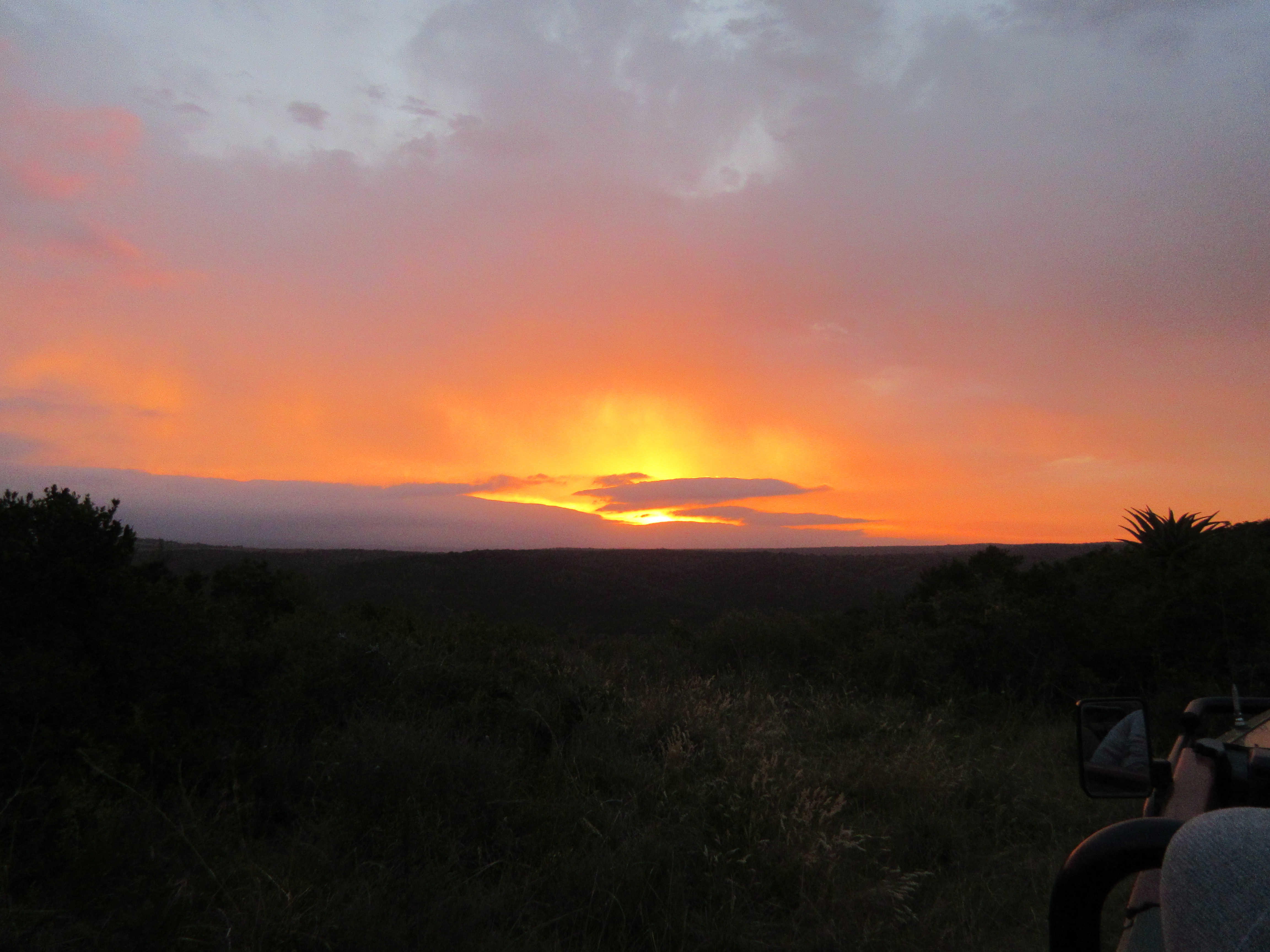 The resort itself is split into a number of Lodges.  There is the River Lodge, Ukhozi Lodge, The Homestead, Settlers Drift and Main Lodge.  All offer differing levels of luxury but even at the lower end,  it fabulous.  We stayed in the Main Lodge and our private chalet had a private pool and most importantly, Air conditioning!  Believe me,  its HOT in Kariega!

This is our Lodge: 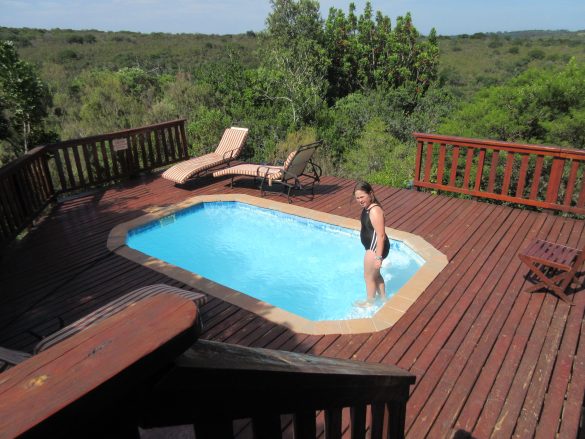 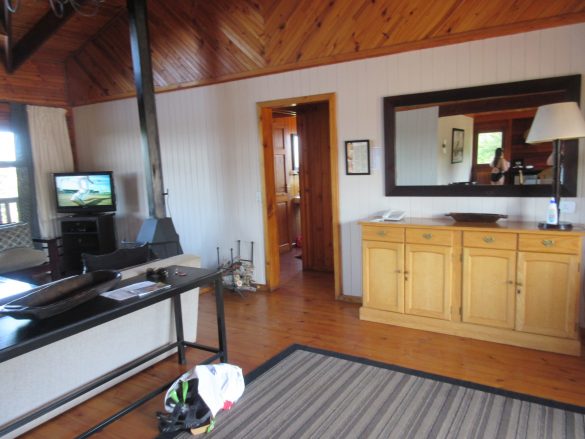 On arrival you turn off the main road and onto what is literally a dirt track.  About 2 miles later you reach reception where you meet you person range. 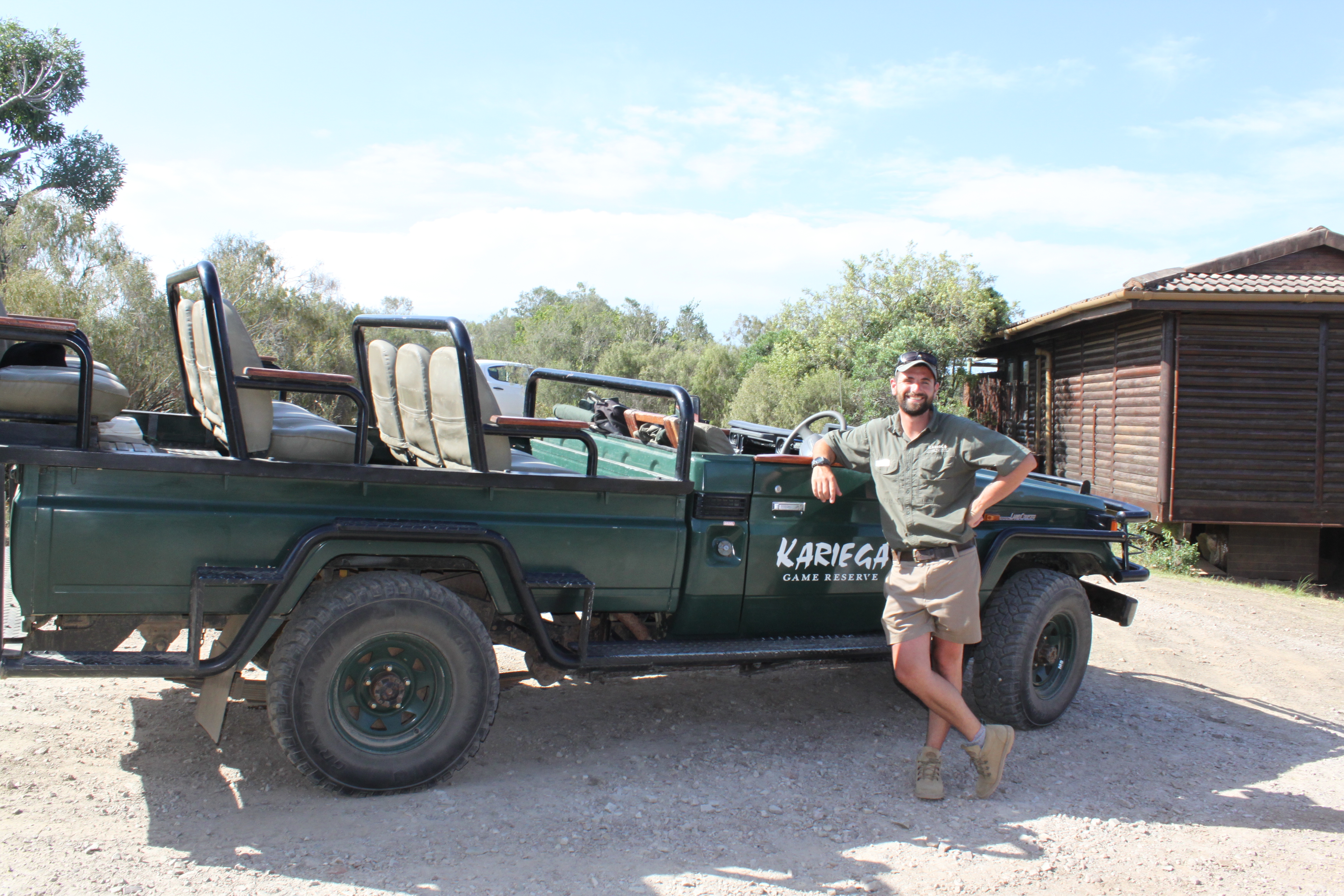 Dave was our guide for the 3 days we were there.  On our first Afternoon/Evening we went down to the bar for a drink with Chop.  Chop is the manager and a friend of Niall;’s who had topped him off we were coming. 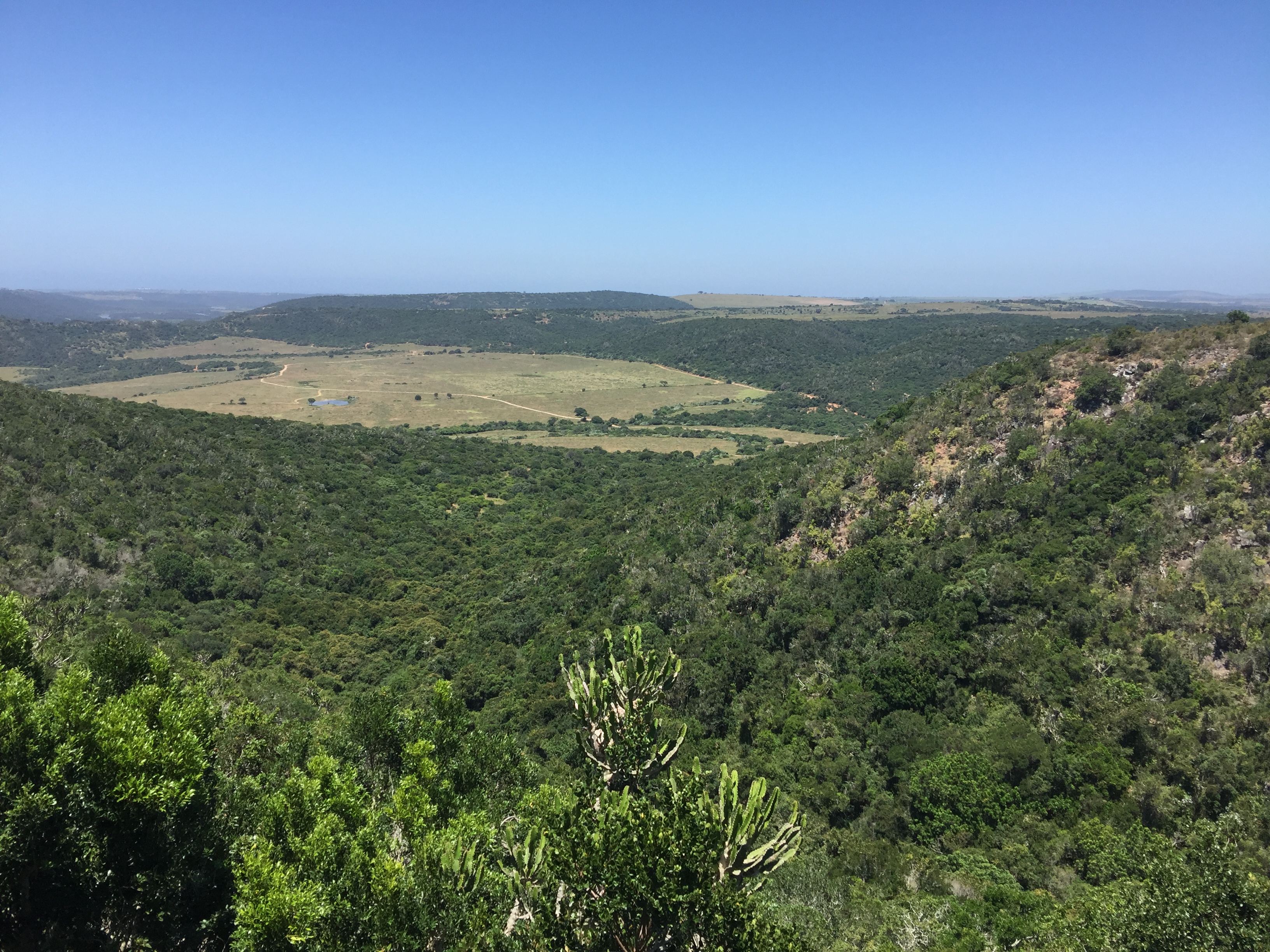 …..when all of a sudden Chop dived in a removed the biggest spider i have ever seen from Sam’s shoulder.  Fortunately she had no idea it was there so only freaked out once Chop has removed it! Safe to say Dad and I had a laugh about it!

We then proceed to enjoy a series of Game drives.  The drives take place early morning and late evening for a couple of very good reasons.  Firstly it is incredibly hot during the day.  So hot in fact it is unbearable. The other reason is that because it is so hot, the animals look for shade and you don’t see as much!  As you are up at 4 am everyday it is nice to have a daytime power nap in air-conditioned rooms!  The game drives are literally off-road.  When I mean off road,  I really mean there are no roads.  As you will have seen above the vehicles are built to withstand the terrain.  They are however surprisingly comfortable but you do hit some hard bumps and you need to hold on!  if not you may lose a couple of teeth on the bars!

There is no real way to describe what you see other than using images. It is simply amazing.  I really cannot put it into words! Giraffe, Elephants, Lions, Blesbok,  Springbok, Jackal pups,  Tortoise,  Warthogs, Rhino and so much more,  all in a natural environment.  Please take the time to flick through these photos… 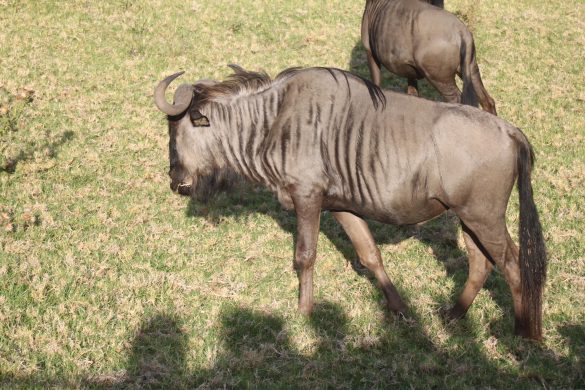 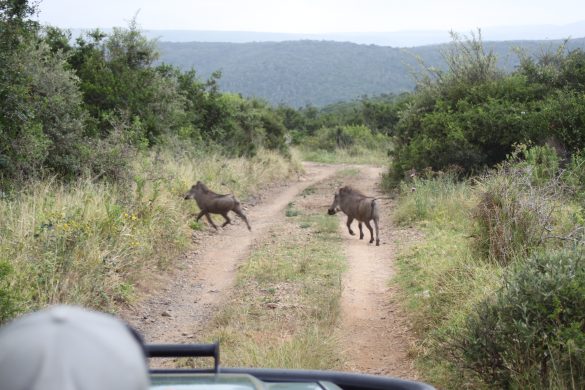 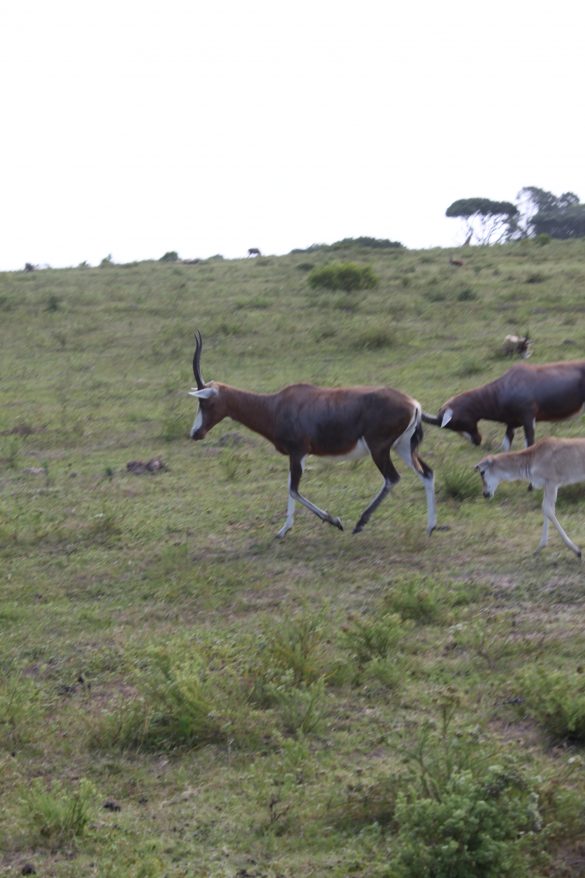 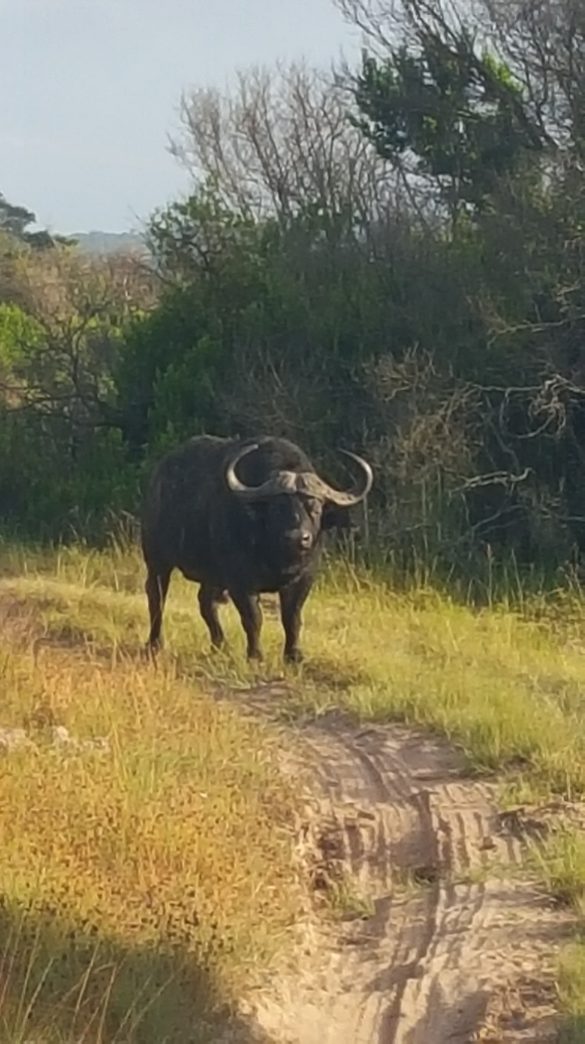 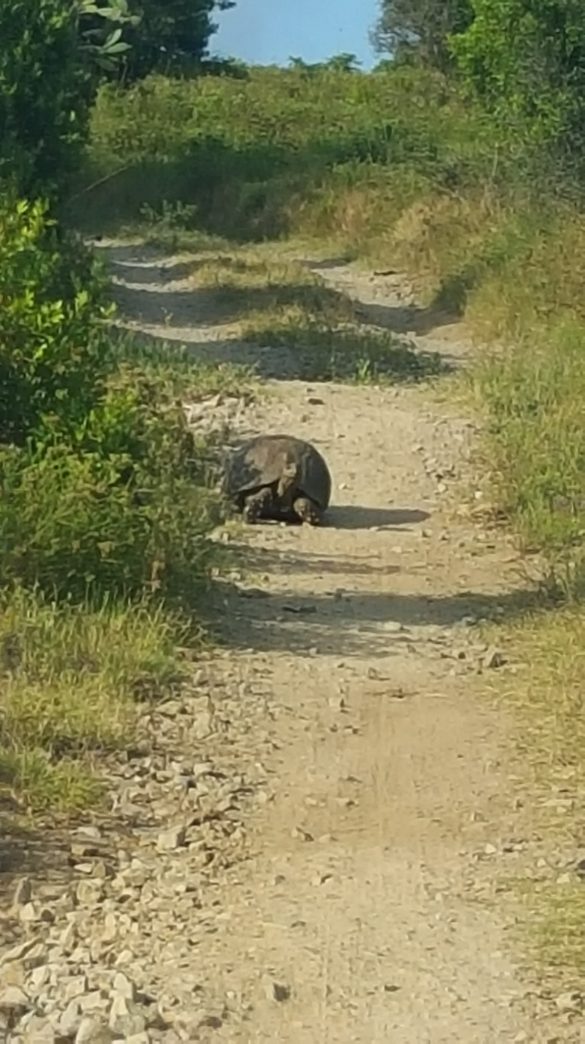 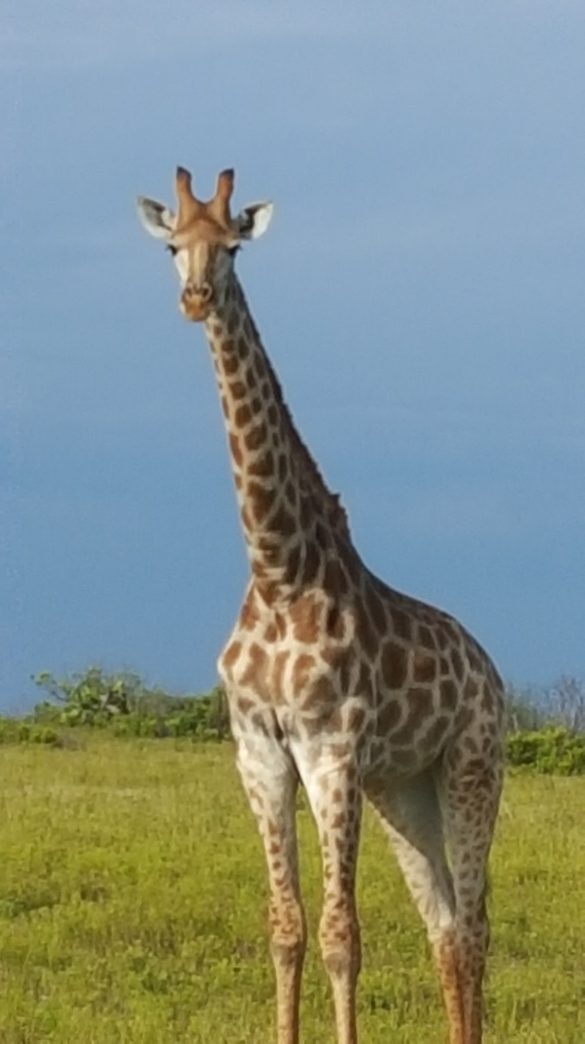 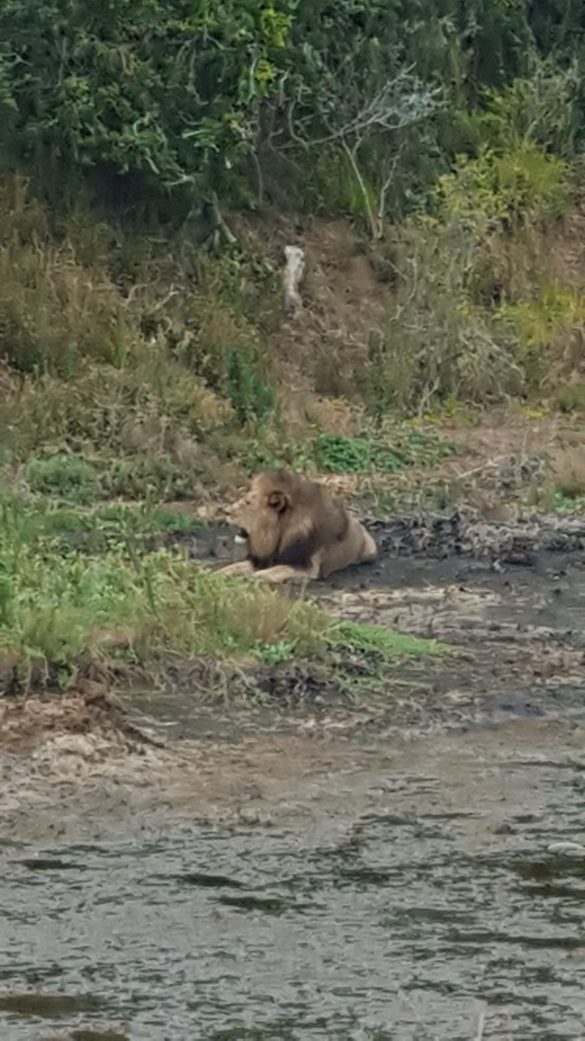 I just want to pic out a few highlights.

Firstly,  we found a millipede! 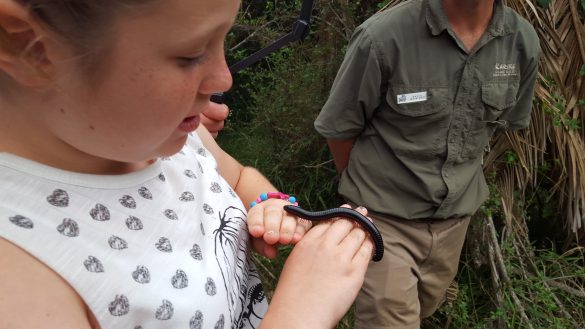 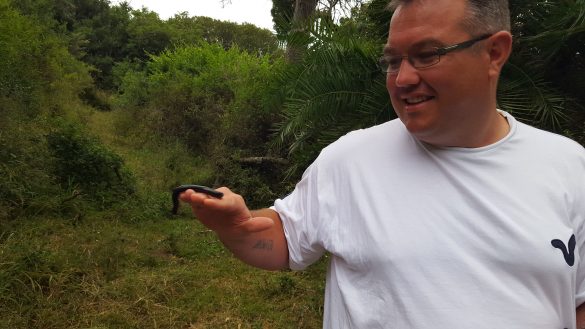 Seeing Hippo’s in the wild! 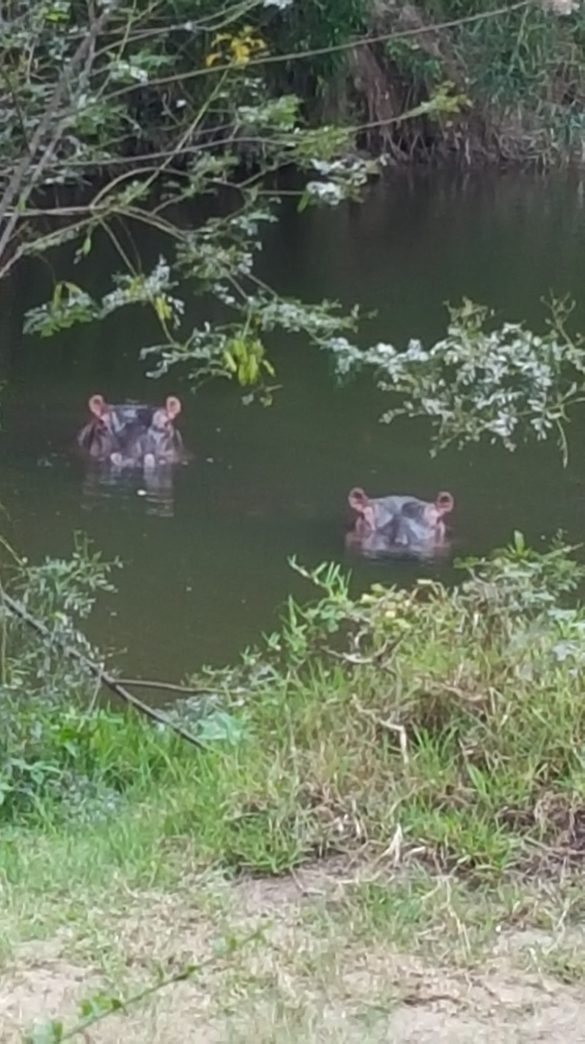 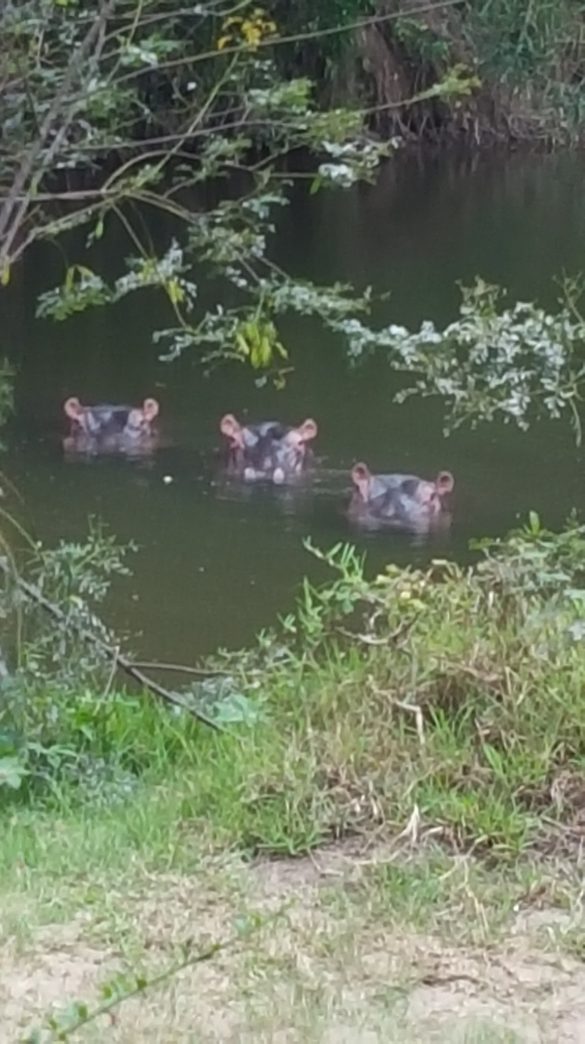 How close can you get to an elephant! 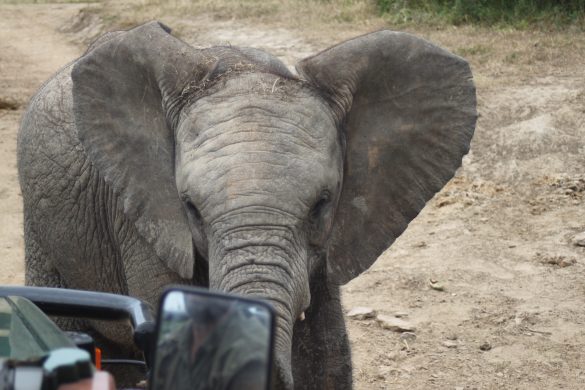 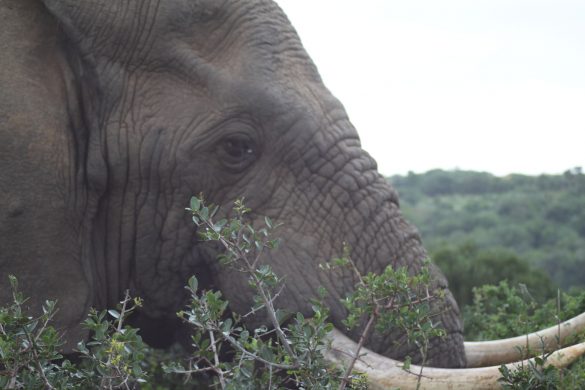 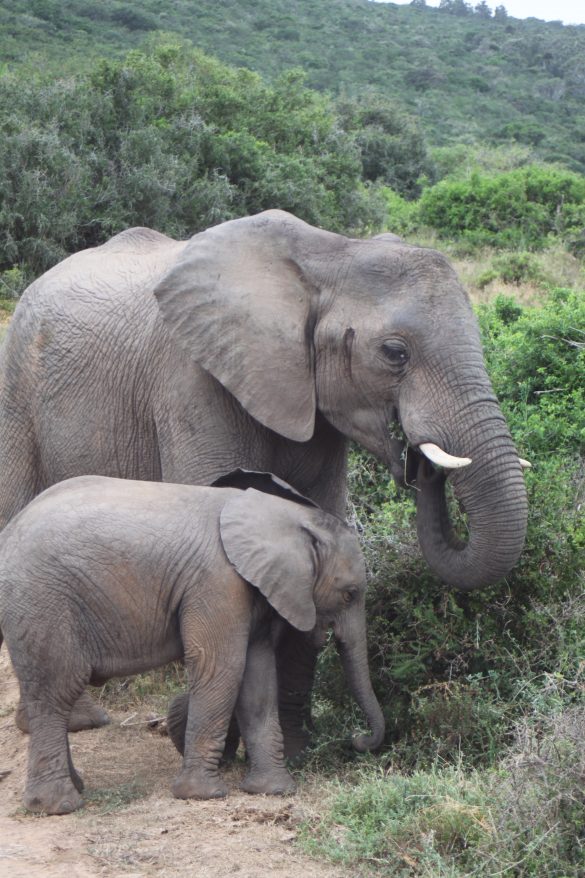 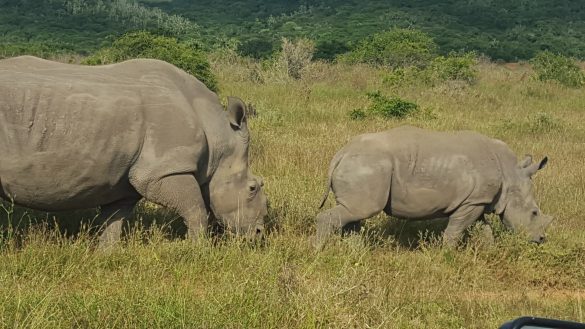 Guess which one is missing…..

The Rhino pictures are of Thandi and her cub Thembi.  These are 2 very well-known Rhino’s. They were subject to an poaching attempt.  Kariega Game reserve is working tirelessly to protect these animals and eradicate poaching totally.  Please see a later post on theses 2 amazing animals and the efforts to stop poaching.

Our trip was also finished off with a river cruise on the Kariega River.  Simply Fabulous!

The reserve is full board and the food is amazing as it seemed to be everywhere!  One evening we had a traditional African meal in The Boma.  This composed of traditionally cooked and severed food and traditional dancing! 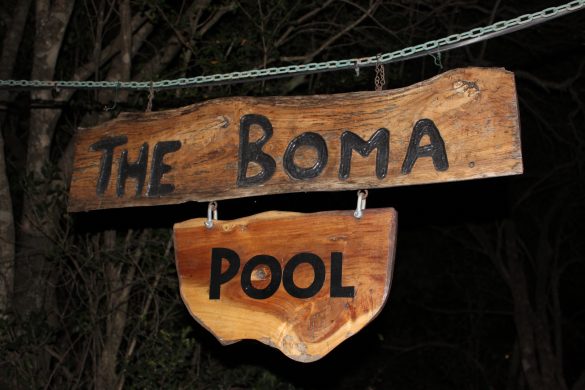 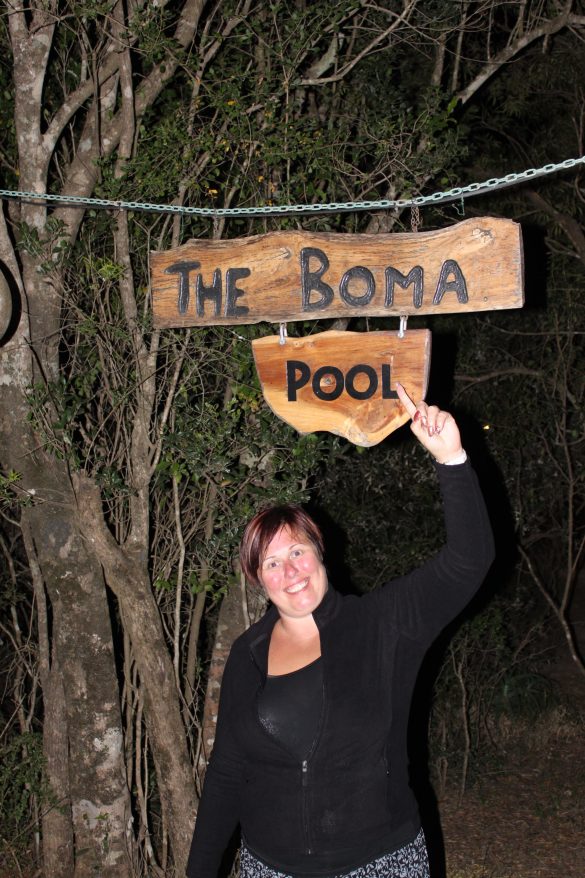 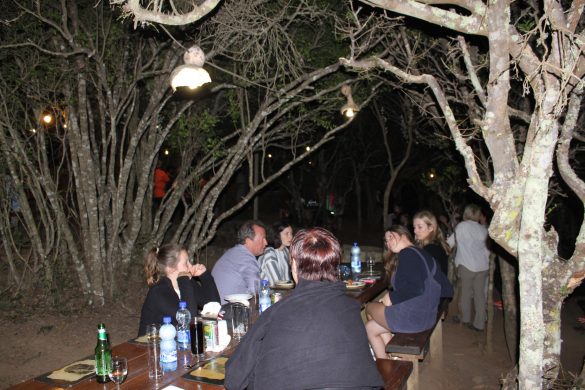 I can’t thank everyone at Kariega enough for the most amazing 3 days ever!  Special thank to our Ranger Dave! But the biggest thank you to go to my parents for taking us here for what could be once in a lifetime moment.

As a line in a film once said:

It’s not about the breaths you take,  it’s about the moments that take your breath away

Kariega certainly took out breath away! Take a look for yourself.

New Award To Crown “Best Of The...