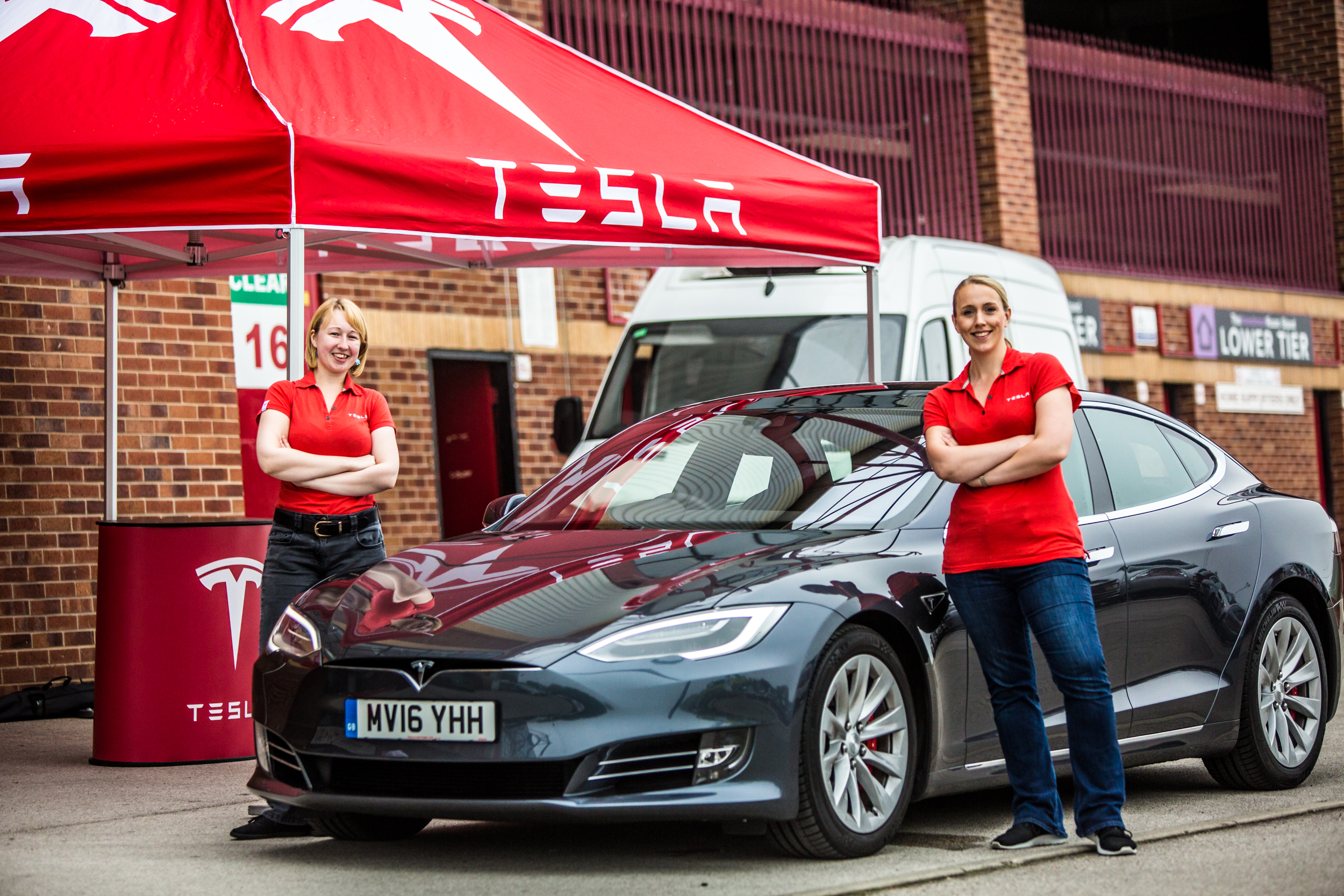 At a recent business exhibition we ran,  we were fortunate to get Tesla to exhibit and offer test drives in their incredible Model S Car.  Here is my take on this vehicle.

The first thing you notice is the sheer size of this car  it is certainly on a par with a 7 Series BMW or Audi A8 in terms of length and interior space. To me it strikes an uncanny resemblance to the new Jaguar XF.

Lets start with the interior of this car.  It is packed full of technology.  The focus of this is a 17″ Touch Screen display that controls almost every aspect of this car.  To me this is possible a little to big and it is made to look even bigger by the minimal list design of the rest of the interior.  A second screen can be found by peering between the futuristic steering wheel.  This screen displays the standard dials you would expect to find in any car,  but, as is becoming increasing more popular these days,  on a TFT screen.

Inside this car is a nice place to be  NOt garish and over the top (except the size of the screen),  just right is every corner.

I have touched on the outside with its XF looks and size.  I have got to say whilst it is a pretty car,  It’s not really growing on me as I had hoped.  I prefer my cars with a nice grill at the front to give it a mean look but i do appreciate that being electric,  this car has no need for one.  I will come on to the price later but this car is not cheap. being an expensive car,  the wheel look like they were taken off my VW CC.  The overriding thing I don’t like about this specific car was the colour.  In a vibrant colour or even white, I think it would do it a lot more justice.

The car picture was the P90D (Sounds like a tax return!) and boy this thing can accelerate  This video is some audio of the passengers experiencing the take off of this car!

The twin electic motors are apparently good for nearly 300 miles and 60 comes up in an astonishing 2.8 seconds.  These electic motors will propel you seamlessly to 155 MPH!

Are there any competitors or better value cars.  although not identical,  The BMW i range (which you will know i am a fan of)  are a lot more cost-effective for pure electric.  The Pure Electric i3 offers a 120 mile range which I know is not as much as the Tesla but it would be enough for me.

For this sort of money you are into i8 territory and there is simply no comparison in the looks department.

There is no doubt that electric cars are the future but today they are expensive and whilst charging points are popping up daily i still believe to need the security of the petrol engine support in the electric as offered by BMW, Toyota in their Prius and many others.  This will change one day.

I would, however like to experience living and using one of these as a daily driver and see how it goes.

For more information on teh full range fro Tesla have a look at their webiste:

Big thank you to Photogenick for allowing me to use the image:

Sam loves Iron Bru after a night out….

Our South African Adventure Part 2…… The...

Which Print method is best for your...