Home Car Reviews The BMW i8 – What a way to start reviewing cars!
Car ReviewsUncategorised

The BMW i8 – What a way to start reviewing cars! 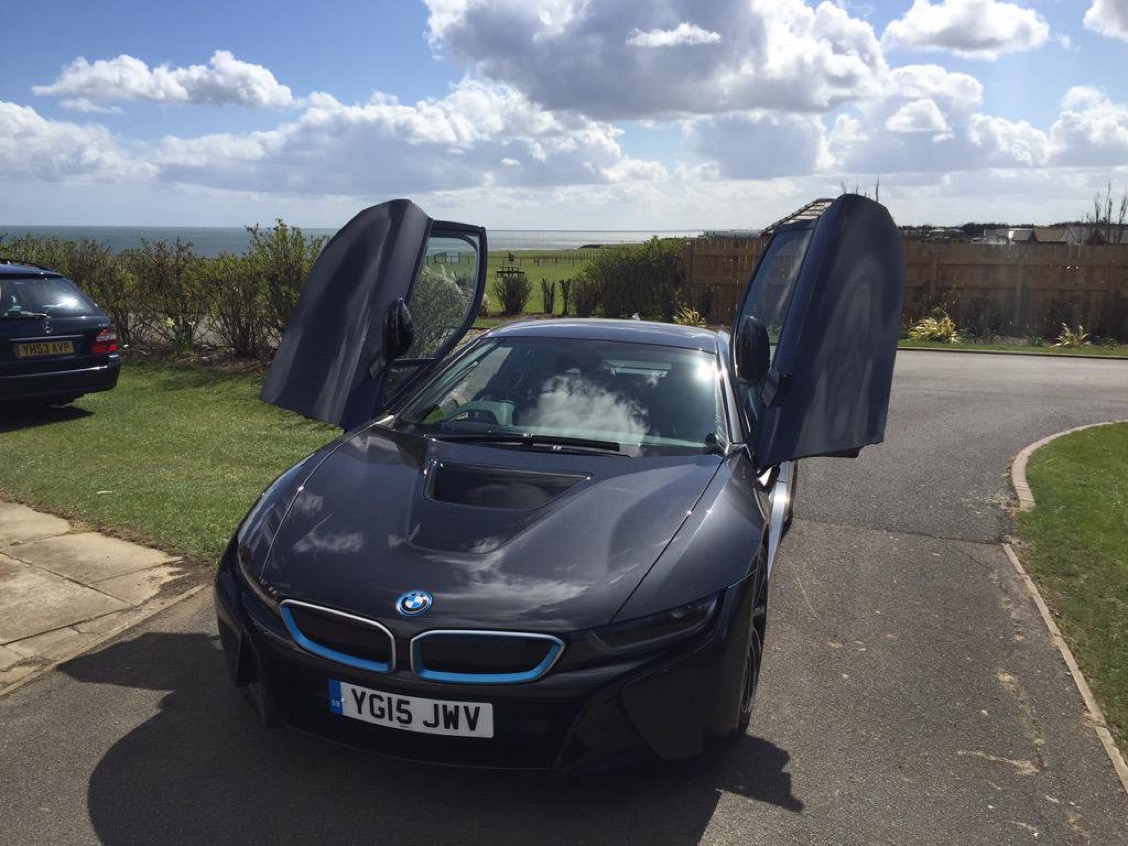 Following the BMW i8 success at the Annual World Car Awards 2015 being presented with the World Green Car Award, I had the fortunate opportunity to take this groundbreaking plug-in-hybrid sports car for a weekend test drive. The BMW i8 combines the performance of a sports car with the fuel consumption and emission figures of a subcompact vehicle. So how did I find it?

It was 3 weeks between booking my weekend and it actually coming round.  The only time I have looked forward to a day arriving more was the day I got married.  As a self confessed petrol head, it’s not everyday you get the opportunity to drive a supercar on the roads, let alone get to use it for a weekend, So I had to make the most of it!

Upon collecting the car on the Friday morning, the first thing you can’t help but notice is the way it looks.  Everyone will have their own taste, but for me this is possible the best-looking car on the road today.  Right from the nose which houses the slim LED headlights, over the huge bonnet vent, down the sides which have been sculpted to direct air over the electric engine, through to the sculpted rear end and 23rd century rear lights.  It is a piece of motoring art, created in a wind tunnel.  You also can’t miss the subtle electric blue accents, which really finish the car off, especially in black like the one I used.

Opening the dihedral gullwing door the first thing you notice is, what I later found out to be,  the in house manufactured Carbon Fibre passenger cell to keep you safe.  The use of these innovative materials and the fact they are “on show” demonstrate the work that has gone into this car.

Siding into what is one of the most comfortable car seats I have ever sat (even my wife said that and she is never comfortable in a car!)  You instantly feel like to have been transported 15 years into the future.  The cabin is simply stunning.  Well laid out with enough buttons and gadget to make any petrol head smile, but also with the air of simplicity and style.  The LED screen is clear and the console easy to navigate. None of this really matters as the head up displays shows everything you need!  I won’t spoil it, but you need to see the interior of an i8 in the dark. Wow!

How the i8 works is engineering technology beyond comprehension, a turbo charged 1.5l petrol engine tuned to 228bhp sits behind the rear seats and a 129 bhp Hybrid electric motor sits at the front giving a combine BHP if 357 and a 0-60 of 4.4 seconds.

There are 3 driving modes.  When fully charged, in E-Drive mode you can run the i8 on battery power alone for about 22 miles.  For maximum efficiency, Comfort mode allows the car to run on electric power with the petrol engine kicking in to maintain the charge in the lithium – ion battery pack giving a combined fuel economy of 94mpg.  If you are really brave you can engage Sport mode by pushing the gearstick to the left and watch the dashboard go red.  This activates both the petrol and electric motors together, opens up the use of the paddle gearshifts and rockets you to 159 mph.  The petrol engine both drives the wheels and also maintains the battery charge to ensure optimum efficiency.  If you dare use this mode all I can say is Hold on tight!

The stated figures are great but in reality they can be quite difficult to achieve.  I did over 350 miles in the car over 4 days.  This was a mix of motorway and single carriageway roads.  It arrived with a quarter of a tank of fuel, I filled it up (With premium high octane petrol) which cost £34-17 and I returned it with just over a quarter of a tank. For a 350BHP + Supercar, that is some serious fuel economy!  Unbelievable in fact.

So I have explained how it works; now for the important bit, how does it drive.  If you are going to spend over £100,000 on a super car it needs to drive well, you need to feel connected to the car and the car needs to connect with you.  The i8 certainly doesn’t disappoint.  Over and above the looks, the wild doors, the laser headlights, this car really is the ultimate driving machine.  The steering is sharp responsive, you feel so connected to the road, gear changes in all mode are smooth and the 4 wheel drive (2 wheel drive in pure electric mode) giving a driving experience that I have never felt before!

I have raved about how good this car is but is there anything that is not so good?  Of course there are a few.  The car is billed as a 2+2.  You couldn’t sit an adult in the back for a long drive but how many super cars have the option.  You can however fit children in relative comfort (my daughter didn’t complain) meaning the i8 can be used for days out.  I have read reviews that the visibility is poor and luggage space is not great.  True, you wouldn’t get enough for a weekend away in the boot, but there are the back seats and I had no issue with the visibility, even through the tiny back window.

The 2 minor issue I found were that with an engine in the front and the back the cabin can get a little warm meaning I had the aircon on a lot.  The other issue s the windows don’t go all the way down meaning driving with your elbow on the door is impossible.  I could live with these issues!

Then there is the current “hot question” regarding hybrid cars.  Fueling vs. Charging.  The car is so clever, this is not an issue.  I used this car for 3 days.  It was fully charged when I took it and I returned it with 4% battery life.  Charge this car every night (which you can do from a charge point or the mains plug supplied with the car) like to would a mobile phone and, as demonstrated earlier, you will get fuel economy like you would from any family hatchback, and more.

One question has been answered for me.  When my friends ask me over a drink what’s the first thing I would buy if I won the lottery, previously I would say I don’t know.  Now my answer is an i8!

The reality is that the car is out of the league of most working people but its baby brother the i3 isn’t.  With similar technology and equally stylish looks in its own way.  I had the pleasure of driving one of these last year and it is well worthy of consideration.

Huge Thank You to Sytner BMW Sheffield for the opportunity to drive this incredible machine!

An Invite to Buckingham Palace!