Home My Life An Invite to Buckingham Palace!
My LifeUncategorised

An Invite to Buckingham Palace! 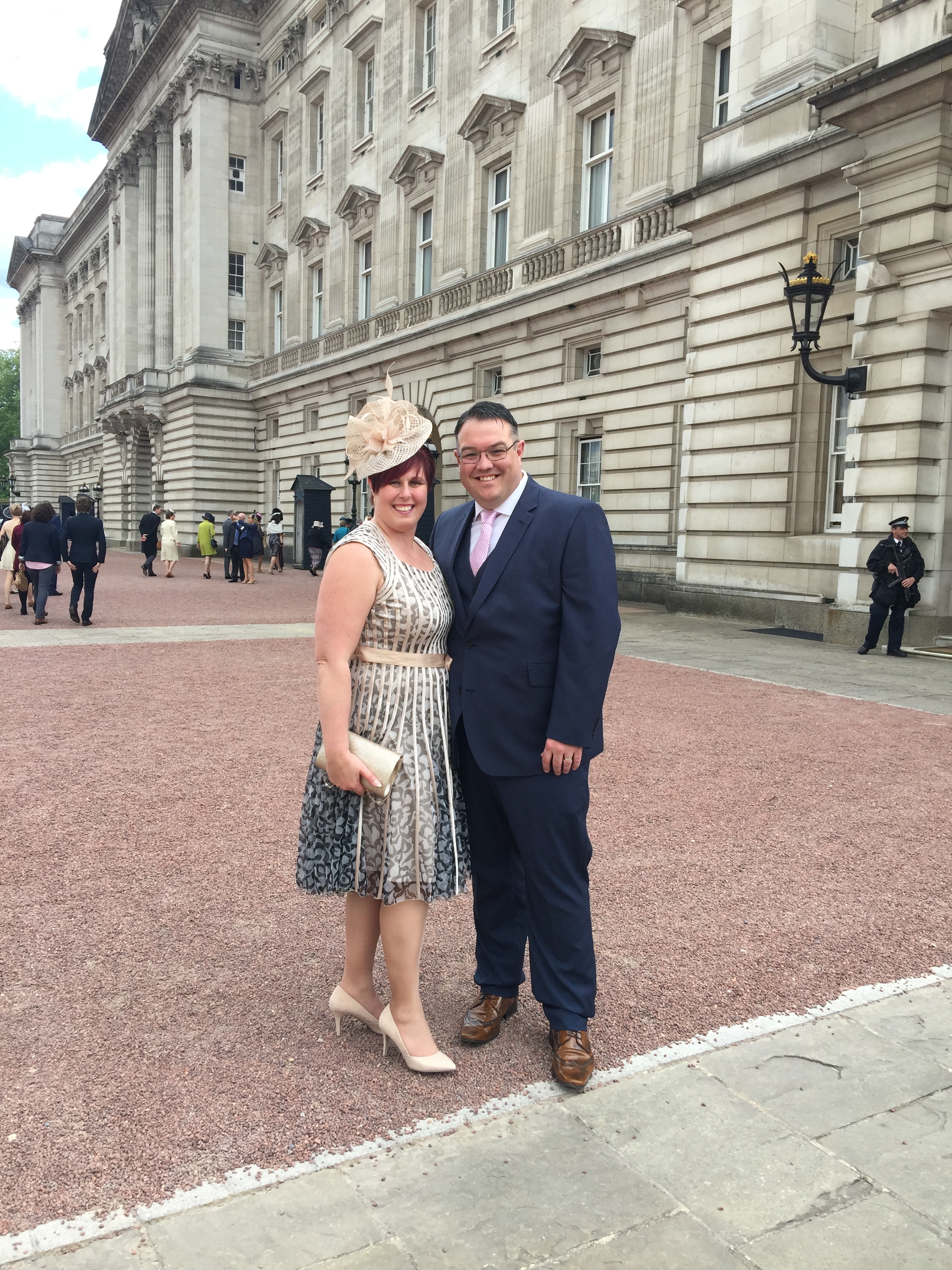 Everyone who knows me will testify to my work ethic.  I have never been shy of hard work and feel earning a living honestly is fundamental and I would always promote this to my kids. I know Sam feels the same.

On top of this I have a strong belief that giving back to your home, your community and to others is essential with the need for return.  It is, however, nice when you do get a little recognition for the work you do and the time you put in.

Through this work I was fortunate enough to be nominated, and accepted, to attend one of the Queens Garden Parties! So on the 24th May off Sam and I went to London!  Didn’t Sam look stunning!

Visiting Buckingham Palace may seem like no big thing to some people.  Why would it when you can pay to take a tour.  But to be invited, now that’s something else.  OK so hundreds of people get invited every year, but to be one of those means something to me and I was, and still am,  very proud of it.

Turned up at the Palace ready to walk in at 3pm there are 2 things that hit you before you even step in.  Firstly the queue!  Its miles but once the gates opened it we were quickly inside.  A very efficient process  that included search and is checks.  The other thing is the crowds!.  So many tourists from every corner of the Globe just standing there because the flag is flying and they know The Queen is in residence!  I have seen Buckingham Palace many times on trips to London with Mum but never took notice of the crowds in this way before.

After we have had our ID checked we are then on the forecourt and it is a very strange feeling im telling you.  We decided to stop for a phot.0.  A lovely old couple also attending take our’s and in return we plan to take there’s.  We get our picture then a security man shouts at us and says “No Photos!”  I do feel a little sorry for the elderly couple but what can I do?  Th picture in question is the cover pic to this article.

So we walk through the arch and we are into the courtyard.  I had seen this area before but only on the news when Barak Obama came for dinner!  There are 3 queues inside.  As this is a once in a lifetime opportunity we decide to go in the central doo where dignitaries would go,  Hey why not…..  Once inside you walk through the palace a short distance then our into the gardens.  The feeling you get doing this is incredibly surreal and difficult to explain, after all you inside Buckingham Palace!

Exiting the Palace onto the terrace you look our over the gardens which are manicured like they are going on show at Chelsea! Simply stunning.  We make our way down the steps and over to the tea tent.  We have a selection of Sandwiches, cakes with a crown in and a choice of tea or apple juice. 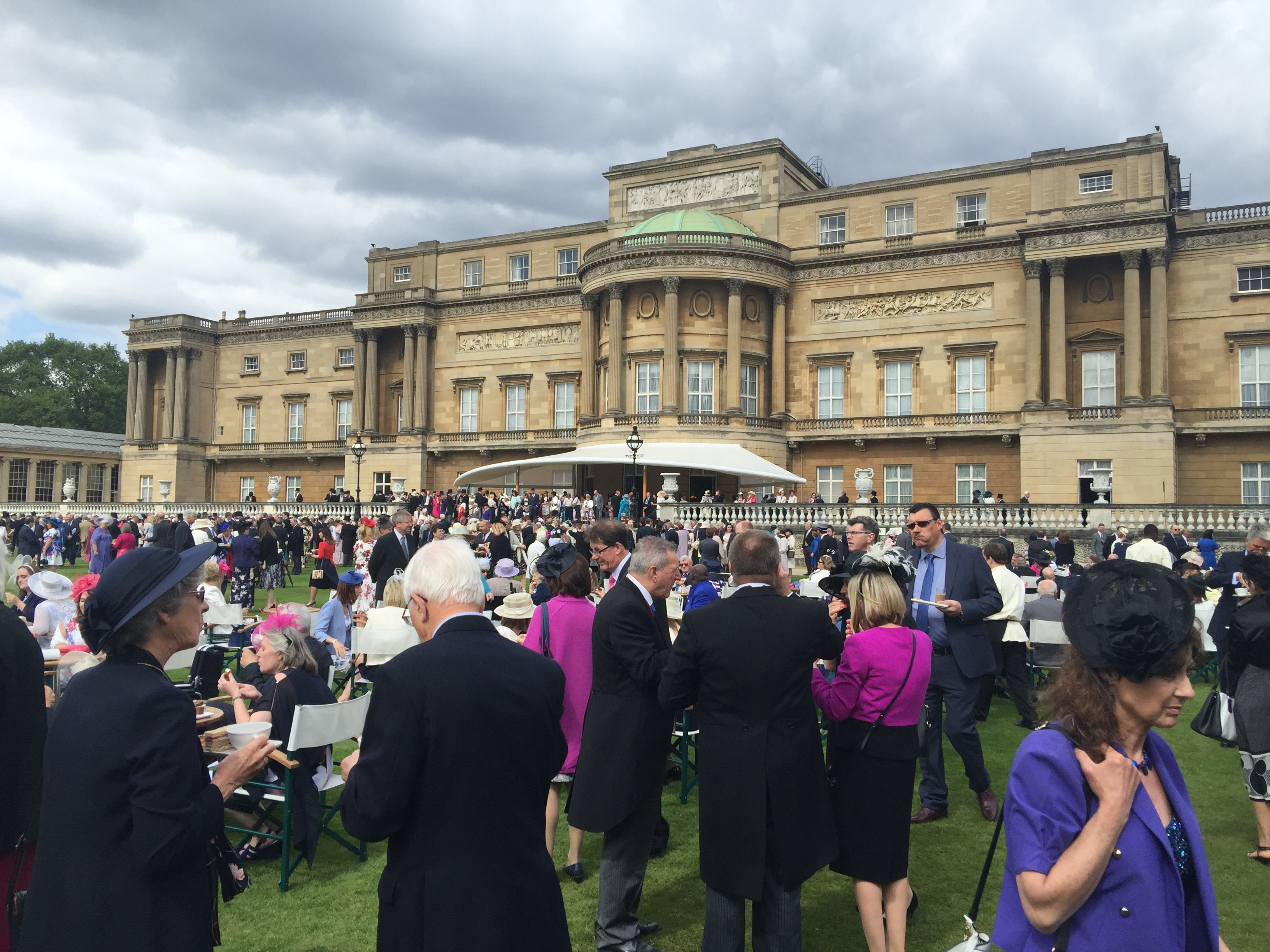 Once we have eaten we make our way to the Royal tea tent to catch a glimpse of the Royal Family.  The exit the Palace at 4pm and it takes them an hour to make the tent, tacking time to greet everyone en route.  We see the Queen,  Price Philip. Duke and Duchess of Cambridge and then,  Running late I assume,  Princess Beatrice comes through the crowds next to us!

I am a bit of a royalist.  I know they cost a lot but I see the value in having a royal family for the benefit of our country both historically and for the future.

Being that close to them and seeing them in the flesh is amazing and a moment I will never forget. Having said that the most amazing person I met was a Navy Officer there as a guest.  We got talking and listening to what he had done and how he had served his country was both humbling and incredible.  Told respect  to everyone in and associated with our armed forces. 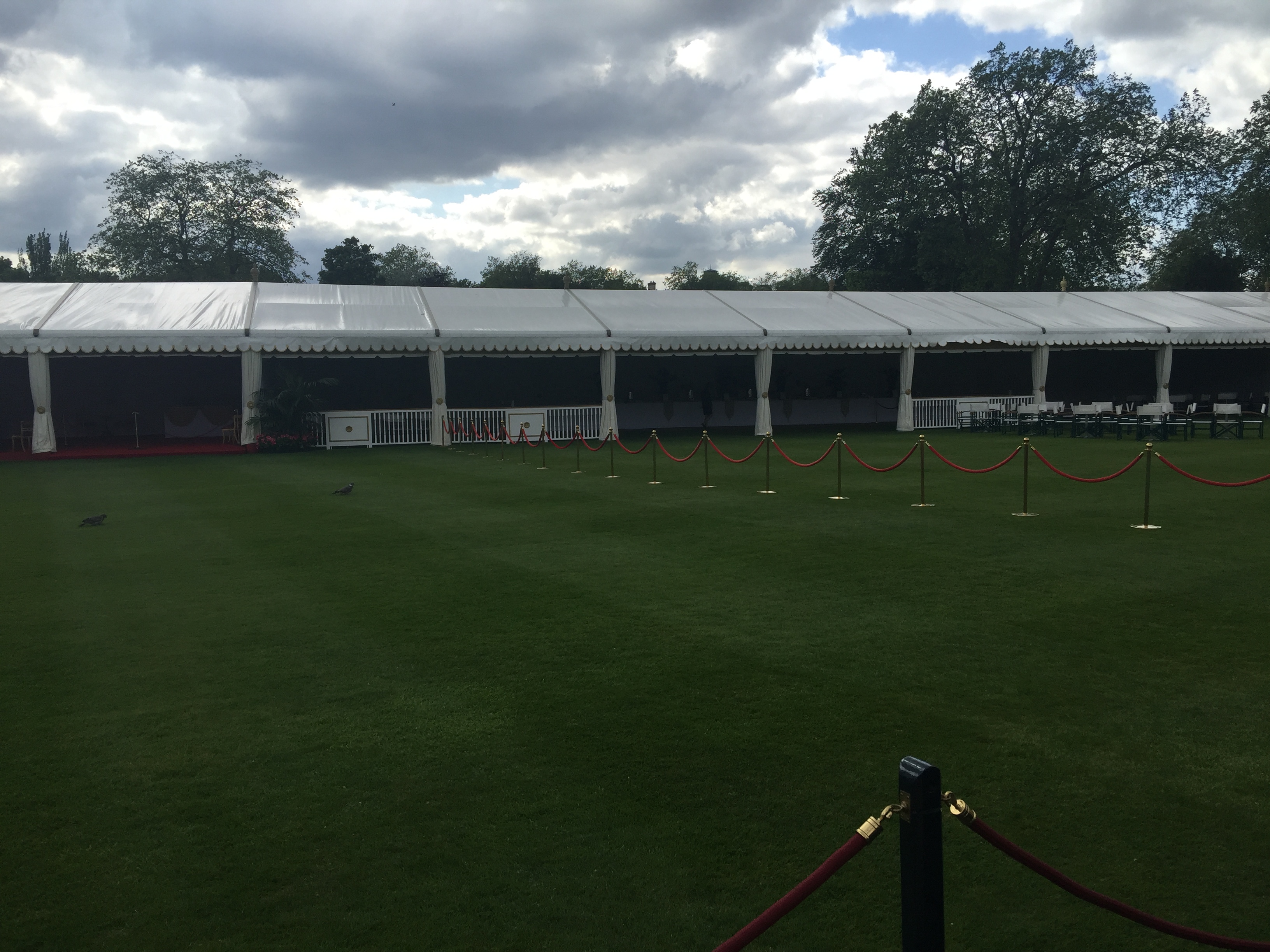 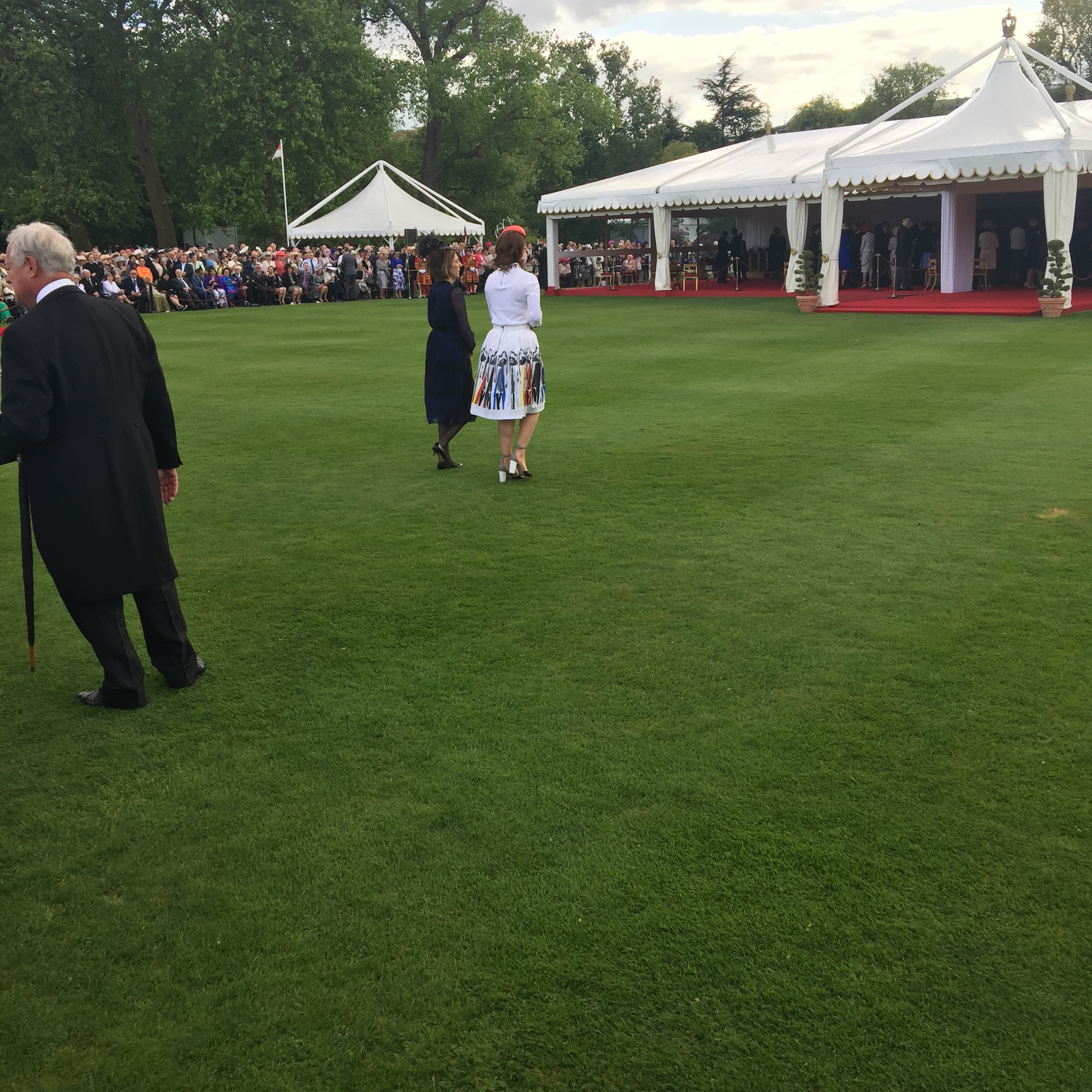 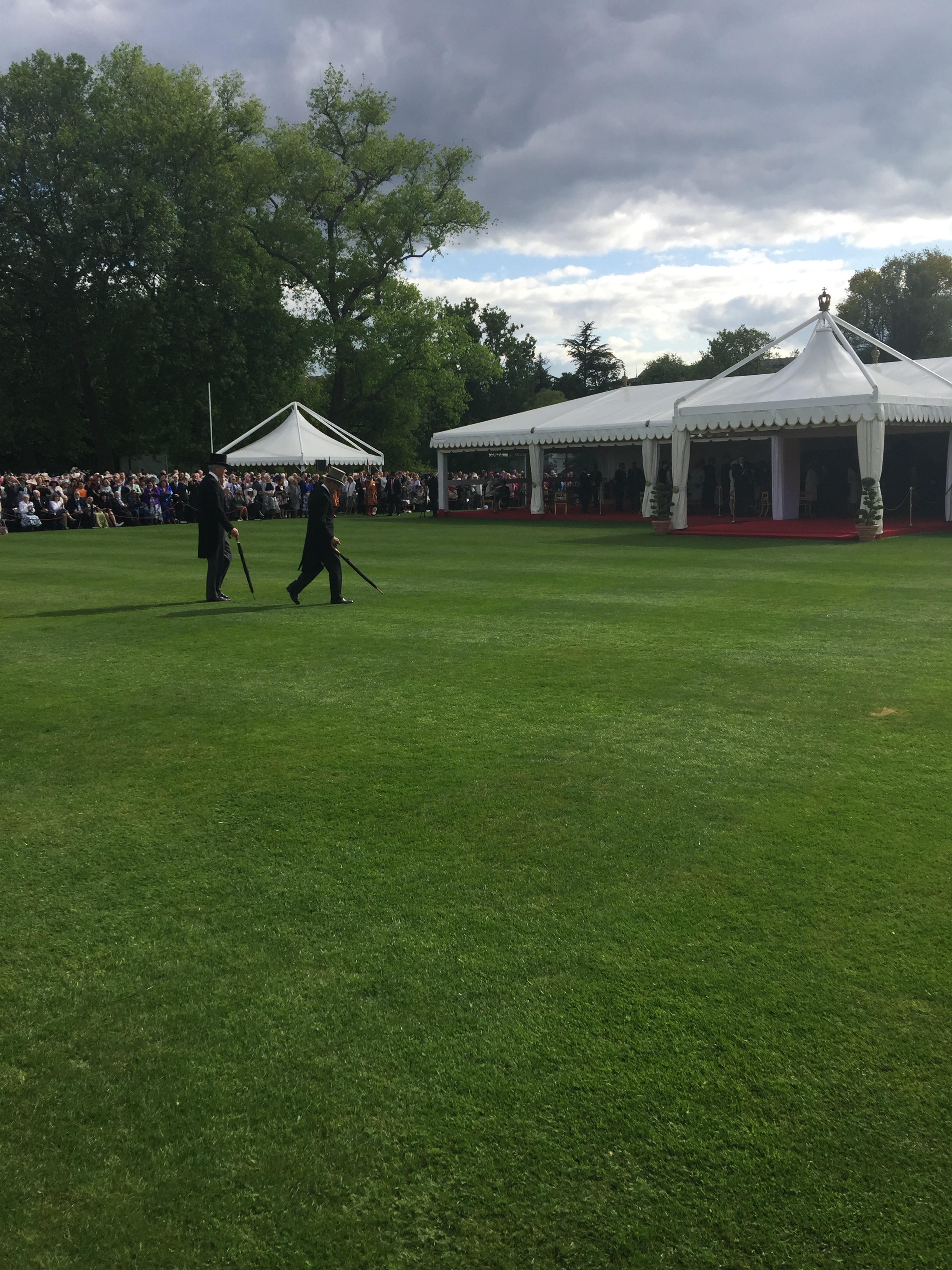 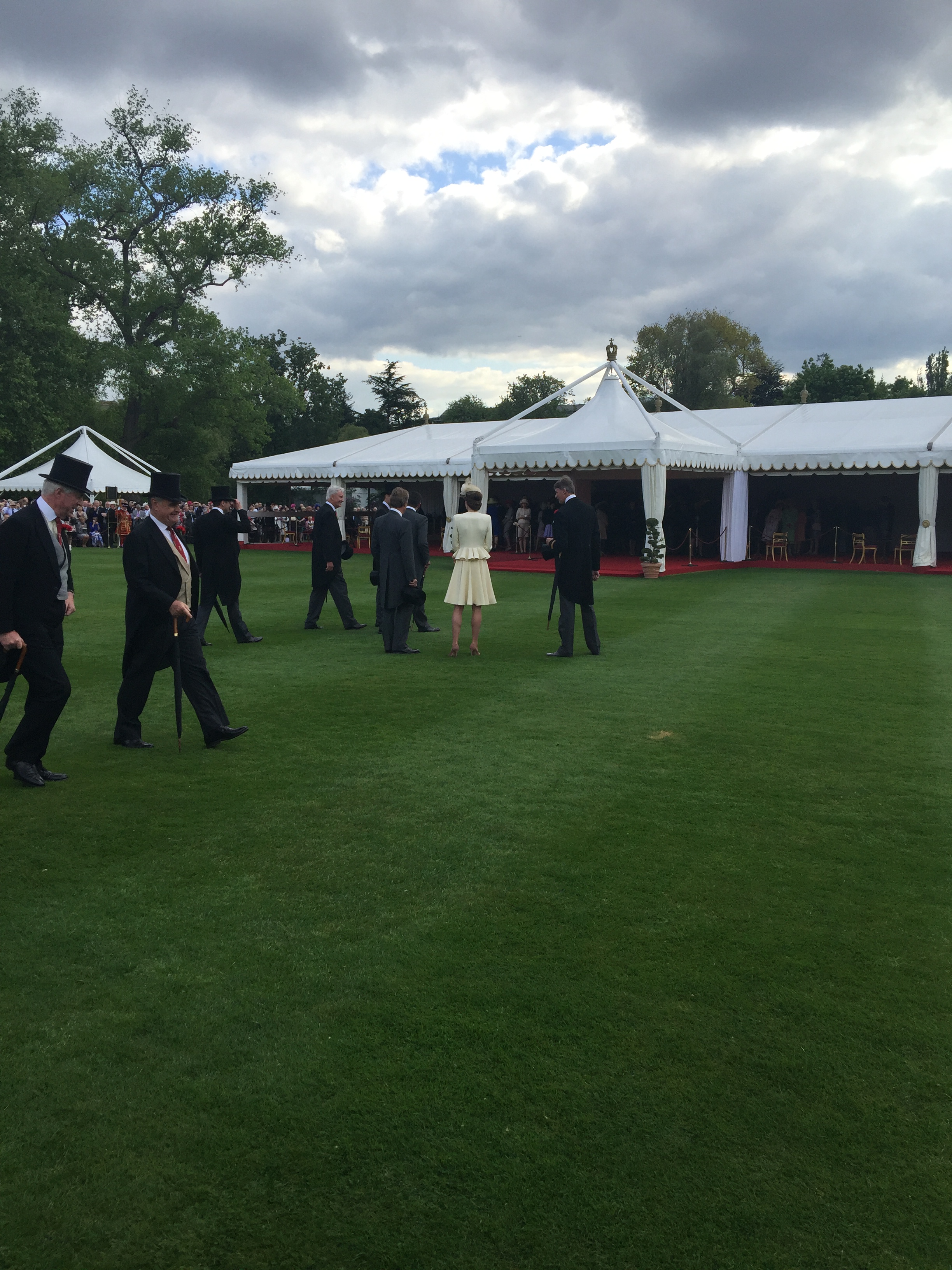 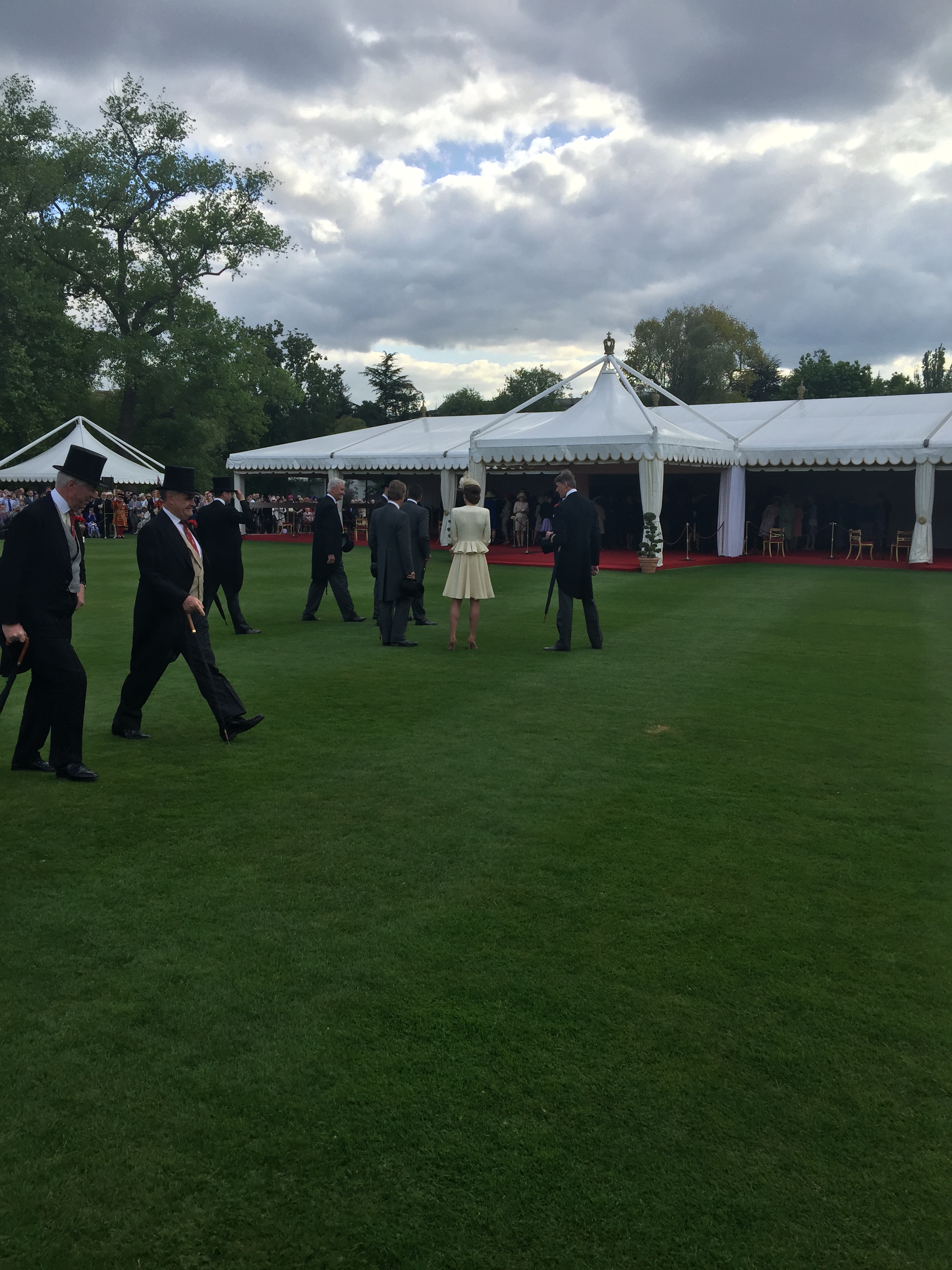 After seeing everything and realising that there will be a crush at 6pm we decide to leave a little early and beat the rush.  This gives us the opportunity walk back through the Palace and out the front door on our own.  Getting to the front of the palace again,  you can hear people whispering “who’s that”  and camera shutters clicking.  We are nothing special but it’s a nice feeling all the same.

We then go off and make a night of it and visit Leicester Square and The Shard.  What a view that is!

A couple of observations from the inside of Buckingham Palace.  Its tired,  Very Tired!  I read somewhere the Royals spent £30 Million on property upkeep last year.  Buckingham Palace needs 10 times that alone!  The windows need doing,  the net curtains a dirty the while place could do with a lick of paint but that took nothing away from the experience. and the memories!

A great day out and if you get the opportunity I recommend everyone accepts the invitation if you are luck enough to get one!

See the Video of our day at Buckingham Palace here!

The BMW i8 – What a way to start reviewing cars!

My New Job – The first week

Business Letterheads – An essential part of...

My First Month in my new job